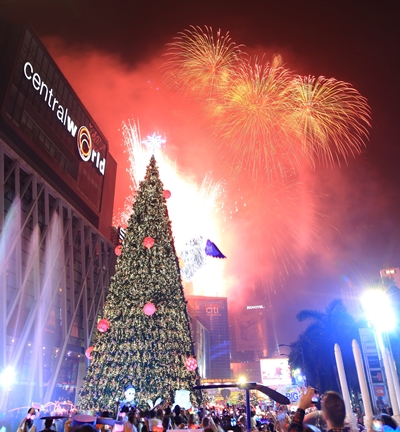 Seeing in the New Year is an age-old tradition and one where people all over the world celebrate in the streets. Strangely, this tradition only took on in Thailand over the last few years, but they are certainly making up for lost time!

Every year see in the New Year in Bangkok (Bangkok Countdown) in front of Central World Plaza, on Ratchaprasong Junction, Ratchadamri Road. The event is sponsored by Central itself, Channel 3 TV, RS Promotion, BEC World, Bangkok Metropolitan Administration, Tourism Authority of Thailand and the Thai Health Foundation. Hundreds of thousands of revelers are expected to be in attendance with spectacular sound and light shows and live on-stage performances by famous bands. There will be lucky draws and Channel 3 will broadcast the event worldwide as part of the global New Year celebrations. Takes place 18.00-01.00. Watch out for the fireworks, the illuminations in Rachaprason Square and the Shopping Streets which stretch from Siam Square intersection to the Ratchaprasong-Rajdamri intersection (near the Erawan Shrine) and from the Four Seasons Hotel on Rajadamri Road to the Chalermchoke Bridge in Pratunam and offer gifts and promotional offers alongside leisure and entertainment activities.

Other great Bangkok venues where you can to see in the New Year include Bangkok's famous Khao San Road which is offering a New Year Countdown Party. There will be a big stage in front of Buddy Lodge with Thai and International bands taking you. In addition, there will be concerts, fireworks and shows at Supachalasai Stadium. Other regions where celebrations are particularly worthy of note include Chiang Mai, Chon Buri, Songkhla, Phuket, and Ubon Ratchatani.

If you are in Thailand for the New Year, look forward to some intense celebrations and the best start to a year you have ever had!