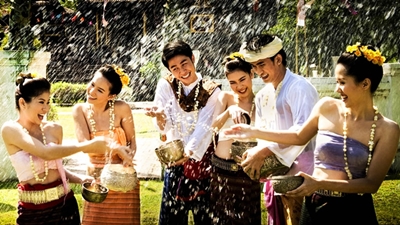 Songkran is on the 13 April every year, but the holiday period extends from 14 to 15 April.

The celebration of the Thai New Year turns Thailand's streets into no-go zones for anyone who doesn't want to get wet! What was originally a time for Thais to pay homage to Buddha images and to sprinkle water on their elder's hands as a sign of respect, Songkran has become a nationwide party where everyone throws bucketfuls of water over each other.

Chiang Mai is probably the most popular destination for Songkran - the city looks more like it is at war than having a good time! Outside Chiang Mai, the capital's leading venue for Songkran is Khao San Road - Southeast Asia's leading backpacker and budget travel centre. Although over the last few years there have been attempts to calm things down, the authorities have only made a little impact - Songkran on Khao San Road is as wild as ever with foreigners and locals alike engaging in full on water combat with each other! Great fun, and despite the time of year, more and more people are coming to Thailand for Songkran, and especially for Songkran on Khao San Road. Be careful though: With the roads wet this is the time of year accidents can happen - be alert and keep one eye on the road!