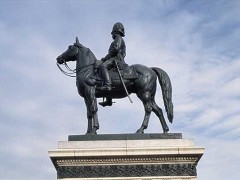 Being so centrally located, the equestrian statue of King Chulalongkorn (Rama V) is well worth a visit. A forward thinking monarch, King Chulalongkorn is revered as the man who elevated Thailand’s status in the world by abolishing slavery and forming strong allegiances with the world’s then ‘superpowers’ - Britain, France, America and Russia. During his 42-year reign he travelled widely, forging strong ties with neighbouring countries and the royalty of Europe. Modern Thailand would probably look very different without his efforts on the world stage. However, the historical significance of this great man is only part of the reason for a visit to his statue. Another reason is his followers.

Over the years, many Thai’s respect for their former monarch has grown to a point where he is now the object of worship. There is a firm belief in the former king’s ability to bring good fortune, especially to those in business. Devotees place candles and incense sticks at the foot of the statue and leave gifts of flowers and brandy – the monarch’s favourite drink – in the hope their prayers will be answered. Tuesday (the day Chulalongkorn was born) sees most activity with countless people lost in prayer around the statue.

Details: The best time to witness this activity around the statue is early evening, just after dark.

How to get there: The statue is at the edge of Lumpimi Park, directly opposite Silom MRT station. The nearest BTS station is Saladaeng.

These buses will take you close to the park: