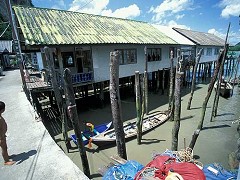 Located off the coast near Phang-nga town is the island of Koh Panyi. Set amongst a series of ‘Karst’ (small limestone islands that have eroded away to create strangely shaped rock), Panyi is a delightful in its own right. However, it has the added attraction of being home to an interesting Muslim Fishing Village.  The village has an ornate mosque and is home to about 120 families whose houses are built on stilts above the water. To supplement their income the villagers sell fish sauce, ‘kung heng’ (dried prawns) and a salty shrimp paste alongside other items that might be of interest to tourists. The village also has a very passable fish restaurant. The villagers are somewhat at the mercy of the larger fishing companies and often the amount of fish they catch is a bit limited. As a result, tourism is an important part of their income. However, for some people this type of tourism doesn’t appeal - there is a feeling of visiting a ‘human zoo’. If you are one of these people, then give it a miss or spend some time getting to know them rather than just turning up and staring!

How to get there: A regular boat service to the island runs from the coast alongside boats you can charter. Boats stop before dark.