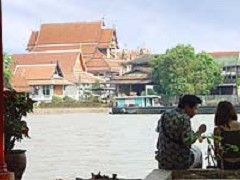 Although officially located in Nonthaburi Province, Koh Kret is reasonably accessible from Bangkok. An island in the middle of the Chao Phraya River, Koh Kret was founded in the Thonburi era and is home to ethnic Mons whose ancestors set up ‘Kwarn Ar-marn’ (pottery village) on the Island after their capital was attacked by the Burmese. The island is famous for blood-red, Mon-style pottery called ‘Hai’ which is still made on the island today. The islanders’ produce is regarded as the most beautiful of all unglazed pottery available and is, of course, hand made. Visitors can attend demonstrations of craftsmen’s skills at the island’s earthenware museum. The island is also famed for its Thai desserts (‘Khanom’) and houses a number of Mon style temples.

Details: Koh Kret’s museum is located near Wat Poramai-yikawat and has a number of interesting collections, including a ground floor exhibition of pottery made by the islanders. Photos are permitted in the museum. A tourist boat runs around the island at the weekend.

How to Get There: Probably the quickest way to get to Koh Kret is by Express Boat which goes directly to the island on Saturdays and Sundays. Getting there by car or taxi could prove a little tricky. Most people park their cars at Sanam Nua pier and take the ferry (10 Baht). You might pay 200 Baht for the round taxi trip on top of 50-60 Baht expressway fees.

The following buses will get you there (to Pakret and then ferry to Island):