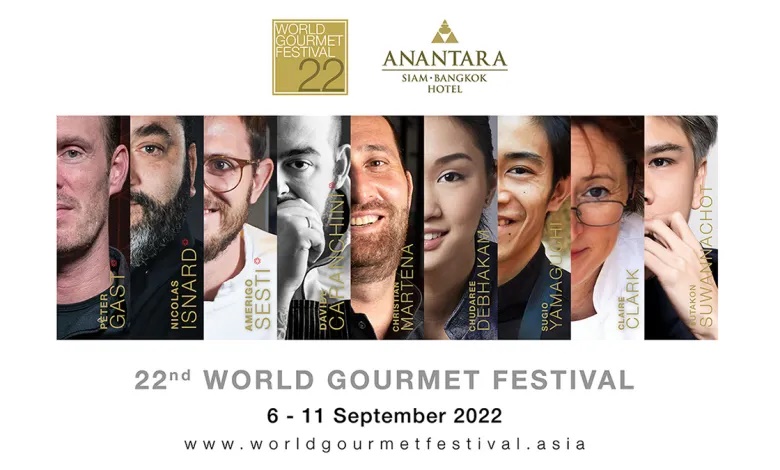 Much-anticipated event from 6-11 September, 2022, will feature the cuisine of chefs from the Netherlands, France, Italy, United Kingdom, and Thailand.

The Tourism Authority of Thailand (TAT) is pleased to report that Bangkok’s most prominent and longest-running international culinary event – the World Gourmet Festival – will be held from 6-11 September, 2022, at the Anantara Siam Bangkok Hotel featuring a star-studded line-up of some of the world’s best chefs.

Supported by TAT and Citibank N.A., the 22nd World Gourmet Festival promises a weeklong celebration of fantastic cuisine paired with wonderful wines. A total of nine acclaimed chefs from the Netherlands, France, Italy, the United Kingdom, and Thailand with four Michelin stars between them will showcase their distinctive styles at exclusive dinners held in the Anantara Siam Bangkok Hotel’s various restaurants and eateries.

Throughout the Festival, each of the chefs will host two or three exclusive dinners, while master pâtissier Claire Clark – considered one of the world’s best pastry chefs – and Sutakon Suwannachot of MasterChef Thailand and Top Chef Thailand Dessert fame will showcase their refined confectionery in the Lobby Lounge throughout the event.

The Festival will kick off with a gala dinner on 6 September at the Anantara Siam Bangkok Hotel’s ballroom, providing a tantalising taste of what is to come during the Festival. Guests will enjoy starters from Sugio Yamaguchi and Peter Gast, mains from Nicolas Isnard and Davide Caranchini, dessert from Claire Clark, and petit four from Anupong Nualchawee, the hotel’s Executive Pastry Chef.

For each dinner ticket sold, 600 Baht will be donated to the Foundation for the Welfare of Rajavithi-Girls’ Home under the Patronage of Her Royal Highness Princess Soamsawali, as well as proceeds from the auctions that will take place throughout the festival.

Reservations are a must for the 22nd World Gourmet Festival and can be made at www.worldgourmetfestival.asia, or by e-mail to wgf.asia@anantara.com or Tel. +66 2126 8866.