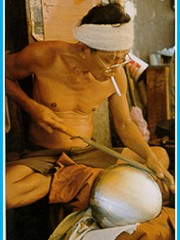 The daily ritual of monks walking along the Sois of Thailand to collect alms (donations of food) is one image that lingers in the memory of many a visitor to Thailand. Barefoot and dressed only in a saffron coloured robe, the only accessory to the ritual is the large bowl the monk carries. Known as ‘Bat’, these bowls have remained the same design for generations are a still made by traditional communities in Thailand. One such community exists in Bangkok and represents a good example of a Thai traditional way of life – Ban Bat. The community originally fled war in Ayutthaya to take refuge in Bangkok and although the community has declined due to the introduction of factory produced Bat, there are still a small number of families making Bat in the traditional way. It takes around two days to produce a Bat using traditional methods. The bowl is made in 8 pieces that are hammered into shape and held together by a metal rim. Despite the complexity and time consuming nature of the process, souvenir Bats are available from the community at very reasonable prices. Although clearly a very important glimpse into Thailand’s history and culture, Ban Bat can not be called a major tourist site. If you have the time it’s well worth the visit, especially combined with visits to other parts of the area.

Details: Ban Bat (literally, ‘Home of the Bat’) is open Monday to Friday is open 10:00 to 20:00 daily and admission is free. It is possible to call in advance and arrange a viewing of the Bat production process.

How to get there: Ban Bat is in the Rattanakosin part of Bangkok which is probably the main area for tourists. If you want to get there by taxi, a fare from central Bangkok will cost in the 70-80 Baht region (depending on traffic).

It is also possible to get to the temple by boat; you need to stop at Tha Chang Express Boat pier.
The following buses will get you there: